Leave a comment
By Luna apricot brandy, by the book, cocktails, easy to make, sloe gin

Ever lost your voice while at a bar and had to mime your drink order? If you had to act out ‘Charlie Chaplin, please,’ you’d try to portray a sweet, slightly syrupy mixture with a well-rounded fruit base and a gentle citrus tang.

Or maybe you’d just point at the cocktail menu. Smartarse.

You know you’ve really made it when a cocktail gets named after you. This one is named after the slapstick comedian and mime artist who was at the height of his career during the silent film era, which was when this cocktail was invented at New York’s Waldorf-Astoria. 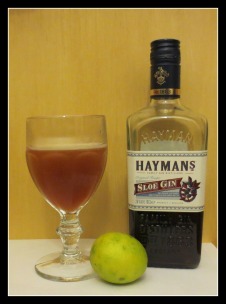 45ml Sloe gin (I used Hayman’s but you can substitute another brand, such as Plymouth or McHenry)

It should be a cocktail glass, but I used a goblet. If you don’t have either, a white wine glass will do (I can hear the purists among you screaming, but hey, not everyone has a cupboard full of stemware!)

Half-fill a cocktail shaker with ice. Add ingredients and mime a bartender shaking a cocktail really, really well. Strain into the glass and serve.

This version of the Charlie Chaplin is in The Cocktail Bible by Steve Quirk (New Holland Press, 2010).

Ooh, did you see that clue a few lines ago? No? It’s the bit that says ‘This version of the Charlie Chaplin’… The recipe above is the first Charlie Chaplin I made, and I liked it. So I replicated the recipe for you here. But while I was researching this post (yes, I do more research than just making and drinking cocktails) I found that it’s not the standard recipe. And I’ve found that to be the case for many of the cocktails I enjoy. Go to two bars and order the same cocktail, and chances are it will be made two different ways*; check the recipe in any two books and there’s a good chance the balance of ingredients will be different. Such is the case with the Charlie Chaplin. While this version has less apricot brandy and lime juice than sloe gin, the traditional recipe contains equal parts of all three. I haven’t made one that way yet – when I do, I’ll report back to you. Now that definitely counts as research…

*This also counts as research and I strongly recommend you do it.