Leave a comment
By Luna by the book, sake, vodka

42 Flying Mules, or, This is Gonna Hurt 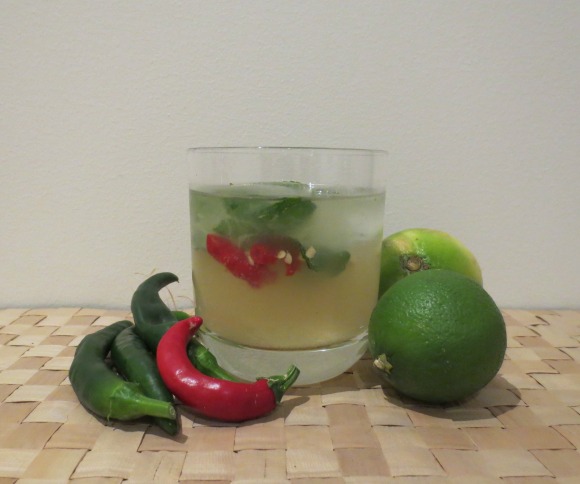 If you ever encounter 42 flying mules you will quite possibly get hurt, what with the kicking of legs and the beating of wings and the fact that you’ve probably taken a mind-altering substance that makes you hallucinate such things in the first place.

If you ever encounter a cocktail that bears the same name you will most definitely get hurt; the chilli in it is real ring-of-fire stuff, from the lip burn as you drink it to the, er, other kind. It’s based on a Moscow Mule (an easy-drinking blend of lime, vodka and ginger beer), but it’s so hot it’s like there’s no ice in the glass. Where a Moscow Mule is a great way to cool down in summer, this is a good way to warm up in winter.

There are two ways to make this drink; the first is as per the recipe, which results in a more refined, slightly less spicy drink – the original 42 Flying Mules. The second is the way I make it, which results in a drink with bits of chilli and mint floating in it and a lot of kick (hence the alternative name – the This is Gonna Hurt). I suppose you could use less chilli, or at least a milder a chilli, but where’s the fun in that?!

The original recipe calls for a highball glass. This will hold quite a bit of ginger beer, which will help to dilute the heat from the chilli. I used a tumbler so that the flavours would not be so diluted. (Plus, this follows a long-standing 52 Cocktails tradition to make Moscow Mules in a tumbler, using twice as much vodka and half as much ginger beer as you’re supposed to use, which results in a drink that’s delightfully named a Russian Headfuck.)

METHOD 1 – AS PER THE ORIGINAL RECIPE

Chop the lime into quarters. Muddle lime, mint and chilli in a shaker. Add the sake, vodka and lemon juice, plus a good handful of ice. Shake it hard. Strain into a highball glass, top with ginger beer and garnish with a mint sprig.

Juice the lime. Muddle lime juice, mint and chilli in a tumbler. Half-fill the tumbler with ice. Add the sake, vodka, lemon juice and ginger beer and stir gently.

Making this drink – using either method – is easy. Drinking it can be a bit of a challenge!