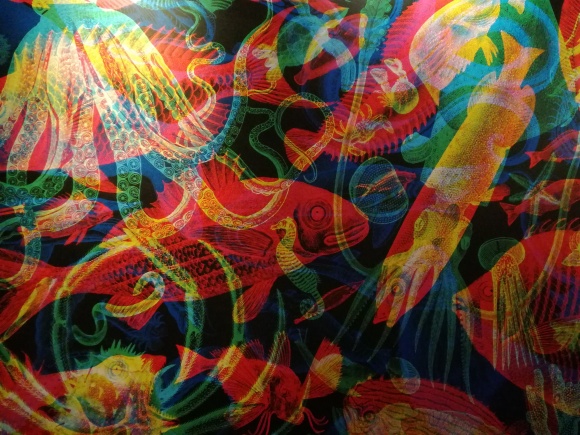 Viewed through 3D glasses, the colourful creatures in this artwork suddenly reveal their black-and-white counterparts that are hidden away on a secret layer beneath. And in a way, that sums up Library, a speakeasy in Singapore that’s been called everything from ‘Singapore’s worst kept secret’ (by Traveller.com.au) to ‘the kind of bar I could happily live in’ (by, er, me). The bar is on trendy Keong Saik Rd, opposite Potato Head Folk , and it’s hidden behind a foyer right next to a restaurant called The Study. The foyer’s decor changes every so often; when I visited, it was an art gallery featuring the above work, but by the time you read this it could be a pop-up shoe shop or a tailor. (When the bar first opened, the foyer looked like a library, which is how the then-unnamed bar got its moniker.) Spend as much time in the foyer as you like, but you’ll need a password to go through to the bar. (If you’re lucky, as I was, the staff will give you a clue; otherwise it’s sometimes secreted away on The Study’s Facebook page.) And then you’re on your own, surrounded by mirrored walls in a space about the size of a phone booth (if you’re too young to know what that is, kindly picture a changing room in a department store). One of the walls is actually the door. Still with me? Good. Because if you’ve made it this far, you deserve a drink.

There’s a kind of Alice in Wonderland feeling as you finally set foot in the bar, a dimly lit space that’s all hushed tones and reverence on the night we visit, though I’m told it gets raucous on weekends. Decor-wise, the word ‘Prohibition’ springs to mind, though I doubt whether any Prohibition-era bar would be this classy – or feature a full-length bar made entirely of riveted copper that looks like a cross between a patched-up aeroplane wing and a Marc Newson couch.

Over the next two nights (yes, Library is so good we visit twice) we try a range of carefully made cocktails from the quirky menu, which is arranged into categories named after celebrities; try a fruity, sexy number from the Marilyn Monroe page, or skip straight to the Andy Warhol section if you’re after something more experimental. Just how experimental does it get? Alcohol-wise, there’s lots of house-made infusions featuring unusual ingredients such as brown butter or cough lollies. Local herbs such as curry leaves appear as garnishes. And one of our drinks is served in a miniature bathtub, complete with a tiny rubber chicken (‘We’ve run out of ducks,’ says the bartender with a smile). But if you’re after a classic, you can get those, too; indeed, one of our fellow guests, a bartender from a different bar who ‘always comes here on a night off’ simply orders a string of well-executed Old Fashioneds because he considers them the test of a good bar. And they must be good because he gets through several as we test various excellent drinks served in test tubes, topped with wooden pipes filled with ceremoniously lit cinnamon sticks, and set upon cubes of dry ice for that ’90s-club-in-a-glass vibe. There’s even an ‘I’ll have what she’s having’ moment when I glimpse another customer’s vivid green, brulee-topped concoction and simply have to have one myself. It turns out to be a Coco Bongo, aka heaven in a glass. Pandan (Asia’s answer to vanilla) gives the drink its colour, and the sweet brulee is made with gula melaka (sugar from a coconut tree), so I’m counting it as a great way to try the local cuisine. Everything we try is worth the pricetag (Singapore is not known for its cheap drinks, and prices hover around the $23 Singapore dollar mark), the bartenders are super friendly and even write out a list of bars to check out in Kuala Lumpur, one of our next destinations, and we leave  – reluctantly – only because we’ve got a flight to catch. Author Jorge Luis Borges once wrote, ‘I have always imagined that paradise will be a kind of library.’ Turns out he was right.