Leave a comment
by the book, Campari, easy to make, rye whiskey, vermouth 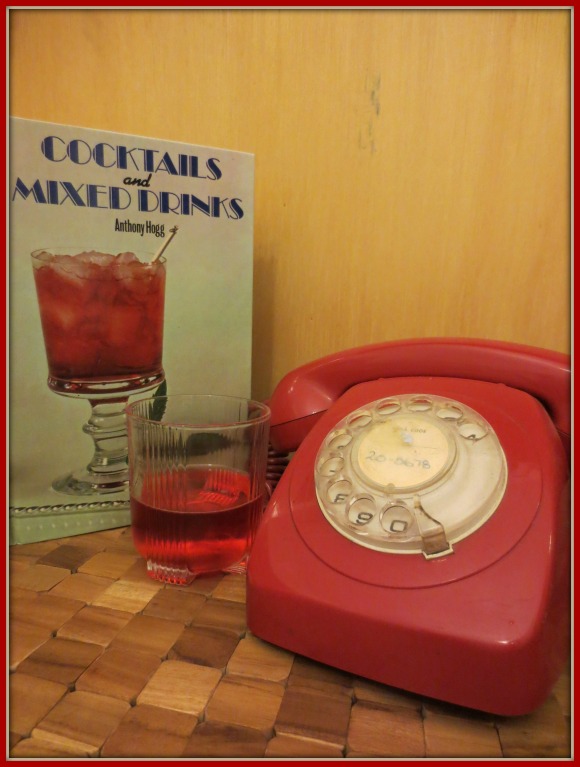 ‘Why certainly, but don’t Hogg the recipe book – pass it to Maureen so she can fix us a drink, quicksticks!’

Hello and welcome to the 1950s, when men chortled down the phone while secretaries made them such drinks as the Old Pal and workplaces, as a result, were almost enjoyable places. That’s the vibe I got when I tried the Old Pal, anyhow – with its rye whiskey kick and the bitter orange overtones of Campari, it seemed like the kind of old-school drink Don Draper would have for breakfast. Then again there are plenty of things Don Draper would have for breakfast, including his secretaries, so maybe that’s not the best way to judge a cocktail…

Anyway, where was I? Oh yes. Although I’m not a Campari fan I am determined to work out why other people are, and when I stumbled across this drink in a vintage cocktail book I thought it’d be worth a go. Containing rye whiskey, dry vermouth and Campari, the Old Pal is a perverted version of the Negroni, which contains gin, sweet vermouth and Campari. And that’s what it tastes like, too; like a watered-down version of a Negroni, even though you’d think the rye whiskey in the Old Pal would have a stronger flavour than the gin in a Negroni. It’s kind of boring, the sort of thing you drink just to get drunk. It’s the kind of drink that makes you realise why Negronis are still popular when Old Pals have fallen out of favour. It’s the kind of drink that could almost – almost – make me appreciate a Negroni, and that’s saying something.

‘I suppose it’s all about the delights of subtlety and nuance in a Negroni, as opposed to the straight-shooting ‘down the hatch, that’s the stuff’ of an Old Pal, Old Pal.’

‘Damn straight. Now let’s visit the Members Club and see if someone wants to taste your Old Pal, you don’t get much more subtle than that.’

Stir all ingredients together in a mixing glass that’s half-full of ice. When it’s ice-cold (place the inside of your wrist on the outside of the glass to check, or just taste-test), strain into the old-fashioned glass and serve.

How would I know, I got the secretary to make it.

This version appears in Cocktails and Mixed Drinks by Anthony Hogg (Optimum Books, 1981).

Nigel the zombunny hoped that was a glass of blood in front of him. He just didn’t have the stomach for a Negroni.

In the lead-up to World Gin Day (June 13), it’s Negroni Week – that’s right, a whole week dedicated to one classic cocktail made of equal parts gin, Campari and vermouth. Bars around Melbourne are celebrating by donating money to various charities when customers order a Negroni, and while I really wanted to support this excellent excuse to drink, I dislike Campari so I was pretty sure I wasn’t going to like Negronis, either. And if there’s one thing worse than drinking a cocktail you don’t like, it’s paying for it – even if that money is going to charity. I still wanted to join the festivities, though, so I donated to charity by buying a cocktail book at an op shop and making a Negroni at home.

It couldn’t have been easier to make, though it was slightly disturbing seeing perfectly good gin (my favourite spirit) being sullied by bitter Campari and turned blood-red by the vermouth. And it couldn’t have been easier to decide who’d drink it; I took one sip, immediately declared I had made a horrific mistake and handed it to the CTO (Cocktail Tasting Officer), who guzzled it, saying it was a brilliant cocktail that reminded him of the bittersweet soft drink Chinnotto…which I also don’t like. Even diluted with some soda water, the Negroni was just too bitter for me. Turns out you can like bitters, be bitter, and still not like bitter things such as Negronis. Who knew?!

I’ve read somewhere that people either love or hate Negronis – there is no in between. Based on 52 Cocktails’ scientific studies, aka tonight’s drinking session, I’d say 50% of people love them and 50% hate them. For the first group, here’s the recipe. On behalf of the rest of us – leave our gin alone!

soda water, to top up

Build over ice in an old-fashioned glass. Twist the orange peel over the top and add soda water if desired. (Other recipes have slightly different methods, such as stirring the drink until it’s ice cold – which I did – and garnishing with an orange wheel. Up to you.)

If you can pour liquid out of a bottle, you can make this drink. Whether or not you can stomach drinking it is another thing altogether.

This version of the Negroni appears in The Liquid Kitchen – Party Drinks by Hayden Wood (Murdoch Books, 2004). Other recipes call for 30ml of each ingredient. If you really, really like Negronis you could probably make a massive one as long as you used enough ice and equal measures of all three ingredients. Sorry, but it ain’t something I’m ever going to try!

No animals were harmed in the making of this photo. Nigel the zombunny, however (supplied by Make it Wednesday), has been well and truly traumatised.