A minty take on a classic lemon, lime and bitters, complete with a Big Pineapple and kitsch koala. Could it get more Aussie than this?

According to the good folks at Angostura, Australia is one of the world’s largest consumers of Angostura Bitters. This is partly because, although Australians have a well-earned reputation as big drinkers, the non-alcoholic lemon, lime & bitters is the go-to drink Down Under for designated drivers or those on a sobriety kick. (It’s possibly also partly because, until recently, you couldn’t easily buy any other types of bitters here). Apparently this refreshing drink is so Australian that if you order it another country, the bartender will just give you a blank look. And so it seemed like the perfect drink to serve at a party held in honour of an American friend who’d just received her Australian citizenship.

There was just one problem: it was non-alcoholic.

And, as a freshly minted Aussie, my friend was not.

And besides, Australian tradition dictates that you MUST drink at a party. Not drinking is unpatriotic – I’m sure that was in her citizenship oath. So I set out to put an alcoholic twist on the classic Aussie non-alcoholic drink – how very Australian.

Lemon, lime and bitters is a classic Aussie combo. Here’s my take on it – with mint added to the mix, and the glass rimmed in Angostura sugar.

First and foremost I wanted to play up our nation’s love of lemon, lime and bitters. I also wanted to create something with visual appeal. And so I created Angostura sugar by adding enough Angostura bitters to white sugar so that the sugar turned pink, then used it to rim a glass. Then I added a patriotic “green and gold” theme to the mix, muddling 10 mint leaves and half a lime (for the green component) along with lemon juice (gold) and sugar syrup, chucking in 60ml of white rum and topping the lot with soda.
Oddly enough it was reminiscent of a Moscow Mule, and probably would have been great with ginger beer instead of soda. (If you’ve never had one, a Moscow Mule is really easy to make: pour 45 ml vodka and 15 ml lime juice into a highball glass that’s half-full of ice and top up with ginger beer. It’s the drink credited with making vodka popular in the United States and is possibly called a Moscow Mule because it gives the drinker a bit of a kick. The 52 Cocktails house version uses half as much ginger beer and double the vodka, and is fondly known as a Russian Headfuck.)

But this minty, citrusy creation wasn’t what I was after and it certainly wasn’t very Angostura-heavy; it wasn’t a riff on a lemon, lime and bitters at all. So I went back to basics, making a lemon, lime and bitters in an Angostura-sugar-rimmed glass and adding a shot of vodka (because nothing’s more Aussie than trying to get your unsuspecting friends drunk with some alcohol that they can’t even taste).

Lemon, lime and bitters in an Angostura-sugar-rimmed glass. Simple and refreshing.

Here’s how to make one:

First, run the rim of an old-fashioned glass over some lemon slices, then dip it in  Angostura sugar. Add a couple of big ice cubes, 20ml lime juice, 20ml lemon juice, 20ml sugar syrup, 4 dashes Angostura bitters (or more to taste) and 30-60ml vodka depending on how strong you want your drink. Give it a stir and top with soda. Yum.

It’s refreshing, easy to drink and easy to make; perfect for a hot Australian day.

Except that it was winter.

And so it was time to pull out the big guns – or at least, my Whip It! Cream Whipper. 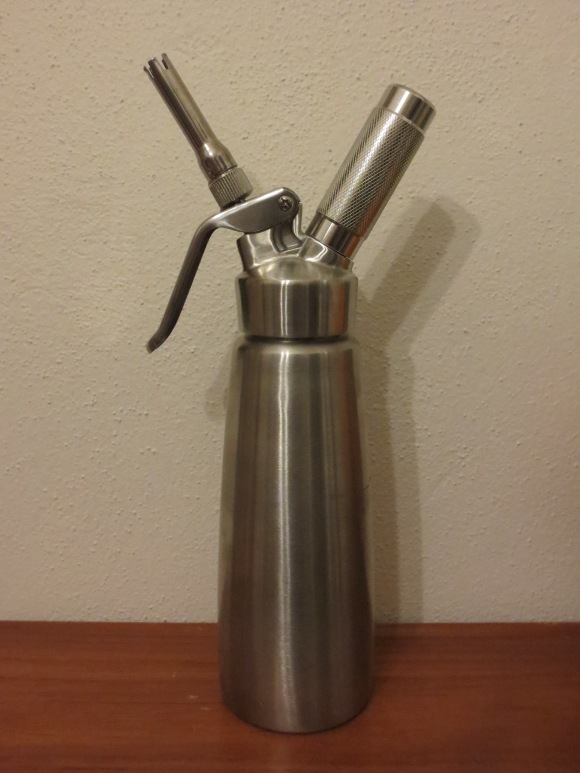 Ooh yeah baby. When a problem comes along, you must whip it.

Apparently these things are great for making whipped cream and desserts and mousse and things, but in 52 Cocktails Land it’s used for one thing and one thing only: making foams for cocktails. Yep, it was time to make lemon, lime and bitters foam, the easiest way I could think of to take the drink from summer to winter and from refreshing to elegant while possibly also getting egg whites to drip from my ceiling (as sometimes happens when I squirt the Whip It’s lever thingy too enthusiastically).

First, I rimmed the glass. I like to place three slices of citrus (in this instance I used lemon) on a flat surface, place the rim of the glass on top and rotate it a few times. 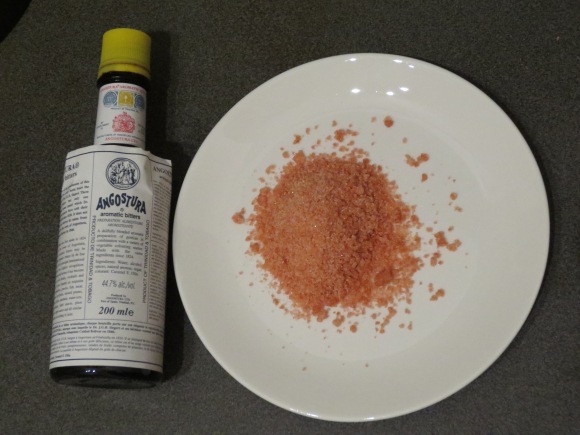 Next, I made the Angostura sugar by adding enough bitters to white sugar to turn the sugar pink. (I initially used sugar cubes doused in bitters and mashed them up with a muddler, then added more white sugar and kept mixing it all up until I had the consistency I wanted: chunky enough to look good, but with enough fine sugar to really stick to the glass and carry the flavour.)

Then I rotated the glass in the sugar a few times…

Next I made the drink.

Add one egg white, 15ml lemon juice, 15ml lime juice, 30ml sugar syrup and 4 dashes Angostura bitters to a cream whipper. Give it a shake and chill for an hour or longer (following the manufacturer’s instructions).

Top with the foam, following the manufacturer’s instructions on how to use the cream whipper to dispense foam without getting it all over your kitchen. 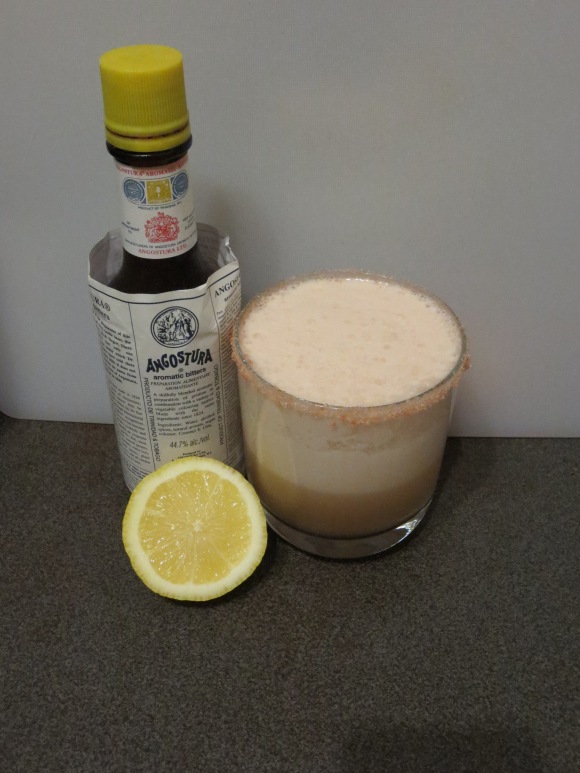 Sprinkle with more Angostura sugar and there you have it – a sophisticated, alcoholic take on a classic non-alcoholic Australian drink.

We really DO do things upside-down here!