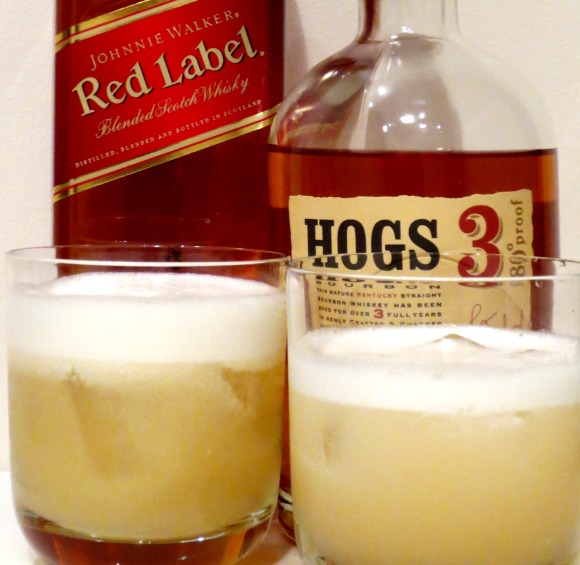 For years I’ve been making whisky sours ‘the wrong way,’ using a bastardised version of a recipe from Shaken: 250 Very Sexy Cocktails (Murdoch Books, 2004) and not really caring because the people who matter most (ie my drinking buddies) love it. For the record, the recipe in the book is:

Shake all ingredients (except the cherry) in a cocktail shaker that’s half-full of ice. Strain into the glass and garnish with the cherry.

I’ve always omitted the cherry (it’s odd how as soon as I buy a jar they, er, disappear) and used bourbon instead of rye, for reasons that are lost to the mists of time but basically involve a combination of ignorance (‘Is rye whiskey the same thing as bourbon?’) and convenience (‘I don’t know but we have bourbon so let’s use that instead’) that, fortunately, had a good result (‘Oh, this? This is a house whisky sour. You can only get this at 52 Cocktails HQ…largely because no-one with half a brain would ever confuse rye and bourbon.’*). It’s a jelly-bean-sweet concoction that bourbon-lovers love, even if it is a bit unorthodox. I’ve been making it for so long now that it deserves its own name – Bourbon Sour would be the logical choice, especially now that I’ve finally got around to making an actual whisky sour with actual whisky. Logic would dictate that to do so, I’d simply use the recipe above, but hey, logic has never been my strong point – especially after a few Bourbon Sours. And so I used a recipe from a Dan Murphy’s** catalogue to make my first Whisky Sour using, well, whisky. As you’ll see, the recipe is quite different to what I usually make – here it is.

Add all ingredients except the cherry to a shaker, and shake until the egg white is frothy. (This is often called ‘dry-shaking’ because, unlike most cocktail recipes, it does not involve ice. Not yet, anyway. Dry-shaking helps the egg white to go frothy. But how does the drink end up cold, you ask – read on.) Add a good scoop of ice and shake well. Strain into a glass that’s half-full of ice, garnish with the cherry and serve.

This is completely different to the Whisky – OK, Bourbon – Sour that I usually make. It’s light and fluffy, nowhere near as sweet and, curiously, lacks the punch of flavour I’m used to. It’s still a damn good drink, though, with a cloud-like texture that makes it more of a dessert cocktail than a pre-dinner drink.

Naturally I couldn’t help but make this cocktail with bourbon instead of whisky, just to see what would happen. And what happened was, I ended up drinking two cocktails that were pretty good, all the while thinking how much I preferred a good old House Bourbon Sour. Lesson learnt: when in doubt, er… make lots of cocktails.

*Don’t fret – this was a long time ago and I have since learnt the error of my ways. If you’re not sure what’s what, there’s a good article here that explains the difference between scotch, whisk(e)y, bourbon and rye.

**Dan Murphy’s is an Australian chain of alcohol stores, aka my second home.

You’d think a cocktail involving only two ingredients would be straightforward but the Godfather has me more confused than an illiterate person trying to alphabetise a packet of M&Ms. According to several recipes I’ve read, a Godfather is simply Scotch whisky and Amaretto, poured over ice in an old-fashioned glass and stirred gently. Easy, yes? Yes. Which is why I tried it when I wanted a whisky-based cocktail that didn’t involve too much effort.

One recipe’s intro warned me that it was ‘supremely powerful’ and ‘demanded respect’ but what I tasted was rather lacklustre. I could barely taste the Amaretto (it was present only as a faint aftertaste) and the whisky tasted watered-down. Which led me to realise the intro was probably referring to the movie The Godfather, not the drink. I’ve never seen The Godfather but I understand it involves some Italians, some violence and a horse’s head. I guess the link with the drink is the Amaretto, an Italian liqueur, because as far as I can tell the drink is 100% horse-free – no foal play involved.

Apparently the Scots did not invent whisky – you can thank the Irish for that – and yet you can order a Scotch on the rocks but not an Irish on the rocks, which seems rather unfair.

Amaretto tastes of almonds despite being made from apricot pits.

And so The Godfather ends up being a drink that tastes of a whisky you can ask for using its generic regional name despite it not being the original version, with a little hint of an apricot-pit liqueur that tastes like marzipan. Confused yet? And to make things worse, it’s not even that good. If this is what they were drinking in The Godfather I’m not surprised they ended up shooting everyone on sight.

Maybe if I’d used a different/smokier whisky it would have been more impressive (I used Johnnie Walker because I don’t feel guilty using it in mixed drink, especially when I’m just experimenting). Maybe if I’d shaken the drink over ice and strained it into a glass, it wouldn’t taste so watered down. Maybe if I added lime…

So I added some lime juice, bunged the whole lot into a shaker and gave it good hard shake before straining it back into the glass. The result was a cross between wedding cake icing and toilet puck (too much lime?). Oh well, at least I’d learnt a few things: (a) shaking up this mixture ‘wakes up’ the Amaretto and brings its flavour forward, and (b) never f*ck with the Godfather.

Half-fill the glass with ice. Add the whisky and Amaretto and stir gently.

Much easier than waking up with a horse’s head in the bed.

1) If you’d like to test my theory that shaking this drink makes the Amaretto more noticeable:

Half-fill a cocktail shaker with ice. Add the whisky and Amaretto, shake and strain into a chilled tumbler.

2) If you want to know what a cross between toilet puck and marzipan tastes like (who doesn’t?):

Half-fill a cocktail shaker with ice. Add the whisky, Amaretto and 15ml lime juice, shake and strain into a chilled tumbler.